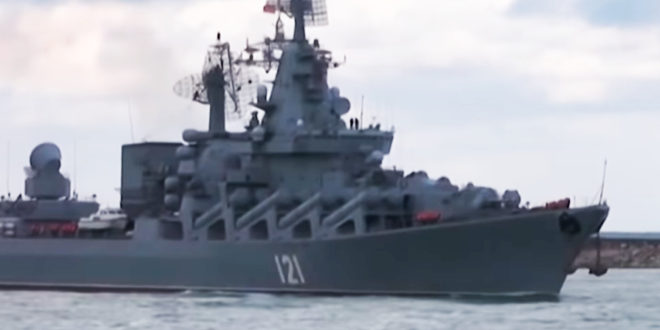 Russia Reports That Its Warship Has Sunk In Black Sea

A Russian warship that was damaged by an explosion on Wednesday has sunk, Russia’s defence ministry has said.

Moskva, the flagship of Russia’s Black Sea Fleet, was being towed to port when “stormy seas” caused it to sink, according to a ministry message. The 510-crew missile cruiser was a symbol of Russia’s military power, leading its naval assault on Ukraine.

Kyiv says its missiles hit the warship. Moscow has not reported any attack. It says the vessel sank after a fire. The blaze caused the explosion of the warship’s ammunition, Russia says, adding that the entire crew were later evacuated. It provided no further details.

The Russian warship Moskva has sunk, according to TASS, which cited the ministry of defense saying the ship “lost its stability due to hull damage received during a fire from the detonation of ammunition.”

“In the conditions of stormy seas, the ship sank.”

Per a statement translated by MSNBC: “When the cruiser, Moskva, was towed to the port of destination due to damage to the hull…caused by the detonation of ammunition, the ship lost stability.” pic.twitter.com/gYynsAID21

The Russian warship, famous for being told by Ukrainian guards to “go fuck yourself,” sank as it was being towed back to port in Sevastopol. https://t.co/9SeFbrxW6e

Previous LGBTQ Activist Ed Buck Gets 30 Years In Drug Deaths
Next Graham: Pray For Next 10 Days For Jesus To Stop War