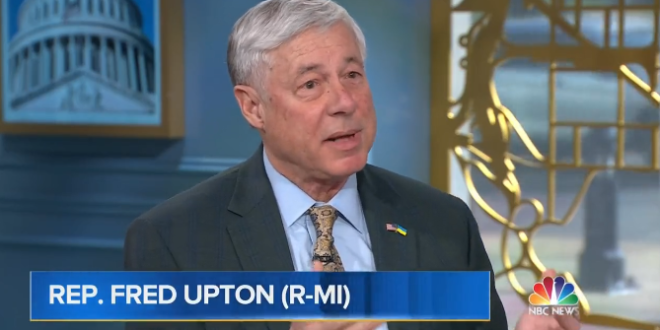 Retiring GOP Rep: Death Threats From Cultists Are “Detriment To Getting Good People To Run” [VIDEO]

Outgoing Rep. Fred Upton on Sunday said fellow Republicans may find it difficult to unite the various wings of the party if they prevail in taking back the House in the November midterms.

Upton (R-Mich.) said he is confident that House Republicans will have a majority next year, but it is the open question of how large their numbers will be that could prove pivotal.

Earlier this month, Upton opted to retire rather than seek reelection following redistricting. He was one of a small group of House Republicans who voted to impeach then-President Donald Trump in January 2021 and who voted for the bipartisan infrastructure package later that year.

Rep. Fred Upton (R-Mich.) said on Sunday that death threats — like those he received for voting for infrastructure spending — could “be a detriment getting good people to run” for Congress.

Upton said on NBC’s “Meet the Press” that he received death threats for voting in favor of the infrastructure bill, which he noted was at one point a Republican bill.

“When they threaten your spouse or your kids … that’s what really makes it frightening.” https://t.co/jeI9HZIuNg

WATCH: Rep. Fred Upton (R-Mich.) says death threats could deter Republicans from casting bipartisan votes. #MTP @RepFredUpton: “It puts you at risk, when they threaten not only you .. when they threaten your spouse and your kids, that’s what really makes it frightening.” pic.twitter.com/XIxCaYuf15