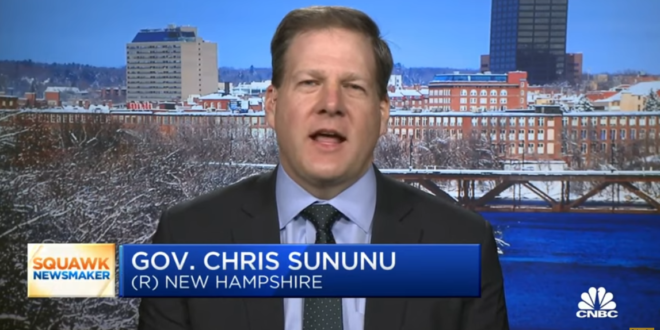 After a two-year absence, the Gridiron Club hosted its 137th dinner Saturday night with the profound desire that the pandemic, two presidential impeachment trials and an attack on the U.S. Capitol have not permanently ruptured this country.

So there was both shock and relief when New Hampshire Gov. Chris Sununu, the Republican speaker for the night, weighed in on Donald Trump.

“He’s fucking crazy,” Sununu said to laughter and applause — and, notably, no booing. “I don’t think he’s so crazy that you could put him in a mental institution,” he added. “But I think if he were in one, he ain’t getting out.”

Politico has some of Sununu’s other jabs:

On Ginni Thomas’ now-infamous text messages to Mark Meadows: “We know she may be extreme, but let’s face it: when it comes to texting, she’s no Anthony Weiner. And you guys thought we forgot about that freakshow.”

And Ted Cruz hanging out with the People’s Convoy: “Nobody really knows why [the Convoy protesters are] in Washington in the first place — which pretty much describes Ted himself, right? … What is with Ted? You see that beard He looks like Mel Gibson after a DUI or something.”

On Trump ally and MyPillow CEO Mike Lindell: “This guy’s head is stuffed with more crap than his pillows. And by the way, I was told not to say this, but I will: His stuff is crap. I mean, it’s absolute crap. You only find that kind of stuff in the Trump Hotel.”

In today’s Playbook, we take you inside the annual Gridiron Club dinner on Saturday night, where New Hampshire Republican Gov. CHRIS SUNUNU stole the show, saying out loud what most Republicans in Washington privately whisper about DONALD TRUMP: https://t.co/6X8O8ONhcN