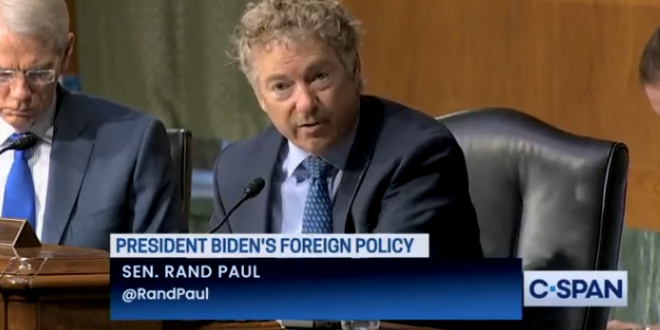 Rand Paul Excuses Russian Invasion To Blinken: They Only Invade Countries That Used To Belong To Them

Memo to Sen. Rand Paul: Ukraine is an independent country, not a Soviet puppet state. The Kentucky conservative firebrand parroted a talking point by Russian President Vladimir Putin, claiming that Russia only invades countries once part of the former Soviet Union.

“You could argue the countries they’ve attacked were part of Russia,” Paul said on Tuesday in a contentious exchange with Secretary of State Antony Blinken on Capitol Hill.

“I firmly disagree with that proposition,” Blinken shot back. “It is the fundamental right of those countries to decide their future.”

Sen. Rand Paul (R-KY): “The countries that have been attacked, Georgia and Ukraine, were part of the Soviet Union … since the 1920s.”

Secretary of State Antony Blinken: “That does not give Russia the right to attack them.” pic.twitter.com/jnlRP6wAsN

BLINKEN: If you look at the countries Russia attacked, these were countries that were not part of NATO

RAND PAUL: You could also argue the countries they’ve attacked were part of Russia

BLINKEN: I firmly disagree. It’s the right of these countries to decide their future pic.twitter.com/4ZeZOVrK0i

Sen. Rand Paul while advocating against Ukraine joining NATO: ‘Would President Biden be open to accepting Ukraine as an unaligned, neutral nation?’

Sec. Blinken: ‘We, Senator, are not going to be more Ukrainian than the Ukrainians. These are decisions for them to make.’ pic.twitter.com/LKN1mcxsEy