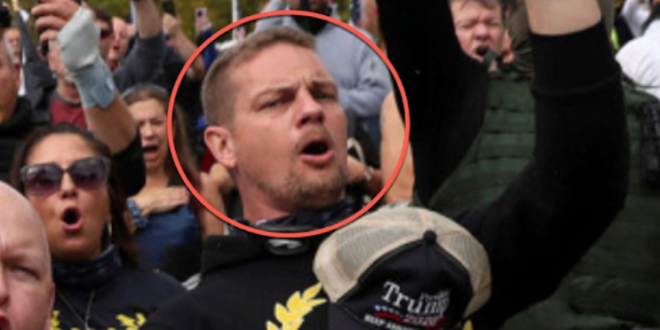 A California man who has proclaimed to be a member of the Proud Boys extremist group has pleaded guilty to assaulting police officers during the Jan. 6 attack on the U.S. Capitol.

Ricky Willden, 40, admitted Thursday that while facing off against Capitol police, he unloaded a canister of chemical spray on the officers, and then threw the can at them when he was done.

He was also recorded in October 2020 wearing a Proud Boys shirt and issuing a homophobic and sexist missive, according to the Sedition Hunters website. Court records from Madera County in California show that he was arrested in May of 2021 for felony assault.

The judge ordered Ricky jailed immediately pending his sentencing on Aug. 5. While out on bail, he cut off his GPS device and was also arrested for possession of meth. #POYB pic.twitter.com/Anm6T4lj0H