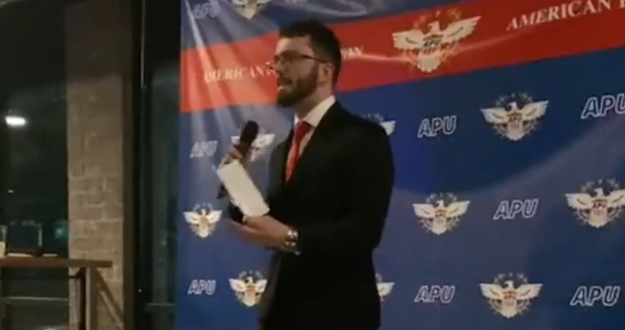 Populist Group Speaker: Ban Women And Feminine Men From Voting Because Of Their “Chaotic Nature” [VIDEO]

“I have to double down on this. They care so much about everybody voting and democracy. And it’s like, if you went back to the founding and the founding fathers would have probably said something like, ‘Women and probably feminine men shouldn’t be allowed to vote because then their chaotic nature would just manifest throughout society.’

“And you would say, ‘No, that’s not right. That’s mean. You’re probably an incel.’ And then the founding father would just say, ‘Oh, well, do you have any evidence from your time to contradict this?’ And you’d just be like, ‘No, not exactly.’ So it would seem that they were actually right.” – Podcaster John Doyle, speaking at an American Populist Union event.

Doyle was speaking at an American Populist Union event, a group that has endorsed Kari Lake. pic.twitter.com/ajIhMFC2ZD

At an event for the American Populist Union, far right YouTuber John Doyle said masks are “gay” and being worn by people hiding their lipstick they want to use to kiss men.