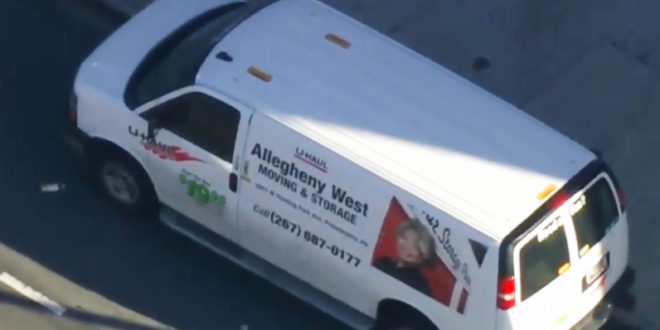 The U-Haul cargo van that police say is “connected with” the Brooklyn subway shooting has been located in Brooklyn, two law enforcement officials tell CNN. Investigators identified the suspect after finding a credit card at the scene that was used to the rent the van.

The shooter, who fled the scene, was described by authorities earlier today as a 5-foot-5-inch Black man with a heavy build wearing a green construction vest and a gray hooded sweatshirt. Investigators have cell phone video from an eyewitness that shows the suspect.

JUST IN: A credit card recovered from the scene was used to rent a U-Haul truck, police source says.

Police located the truck roughly five miles southeast of the subway station and are investigating to determine if it has any connection to the suspect. https://t.co/Gfino6wAQs

SUBWAY SHOOTING LATEST – Below is pic of a bag recovered at the subway, also a credit card recovered at the scene, police say it was used to a rent a UHaul. Police now surrounded a UHaul on Kings Hwy, in Gravesend, trying to determine if any connection to the suspect @ABC7NY pic.twitter.com/KFr9RDL4ko

NEW: Police were able to identify the suspect in the Brooklyn subway shooting after finding a credit card at the scene, a credit card that was used to the rent the U-Haul cargo van, two law enforcement sources tell me & @ShimonPro: https://t.co/XCkVRpbrRA

Police have found a U-Haul in Brooklyn they believe the subway shooter rented. They found a credit card on the scene that showed a charge for a rental out of Philadelphia. https://t.co/4pUZpWJCRE

#BREAKING: Law enforcement has found and is now investigating the U-haul van which they were searching for in connection with the Brooklyn Subway Shooting. Van is located on Kings Highway. pic.twitter.com/LxTIYTS6L5