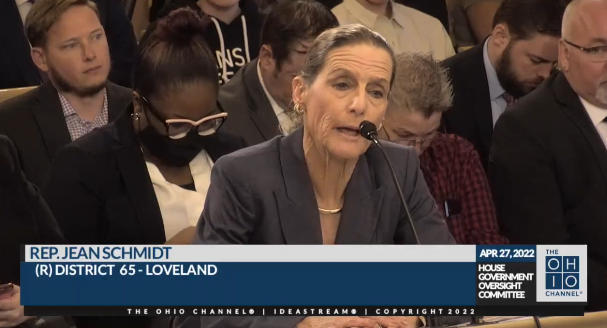 Ohio GOP Rep: Pregnancy By Rape Is An “Opportunity” Because That Baby Could “Grow Up To Cure Cancer”

Ohio Republican Rep. Jean Schmidt sparked outrage during a hearing on an abortion bill when she said a hypothetical teenager traumatized by rape would have the “opportunity” to help that child become a “productive human being.”

The comments came during a hearing over Schmidt’s House Bill 598. The bill has no exception for rape or incest.

“It is a shame that it happens but there is an opportunity for that woman, no matter how young or old she is, to make a determination about what she’s going to do to help that life be a productive human being,” Schmidt said.

Read the full article. The cancer bit is in the clip.

Schmidt last appeared on JMG early this month when she introduced Ohio’s version of a “Don’t Say Gay” bill.

Her first appearance on JMG came in 2009 when as a member of the US House she whispered to a notorious anti-Obama birther, “I believe you.”

OH Rep. Schmidt (R) on her abortion ban bill: “Rape is a difficult issue… but if a baby is created, it’s human life. Whether that mother ends that pregnancy… the scars won’t go away. It’s a shame it happens, but there’s an opportunity for women no matter how young or old…” pic.twitter.com/PVOHWlFvPq