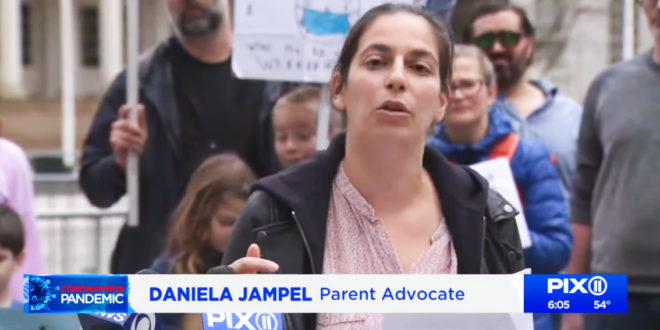 Daniela Jampel has worked for the Law Department since 2016, according to city payroll records and her LinkedIn profile. She has also become a prominent figure in parent-led protests since 2020 to expand access to in-person schooling and relax mask rules for kids.

On Monday morning, Jampel got access to Adams press conference by posing as a journalist and then grilled Hizzoner on his decision to keep the toddler mandate in place despite previously saying he planned to lift it if cases stayed low, according to a Law Department spokesman.

The spokesman said the decision to terminate Jampel had already been made prior to the stunt based on her “troubling claims about her work for the city Law Department.”

Read the full article. The piece quotes and links incendiary tweets by Jampel, but her account has apparently been deleted since publication.