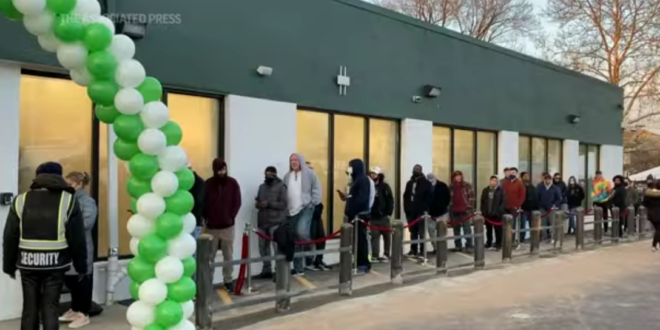 Thousands of happy stoners flocked to pot shops in New Jersey Thursday — forming lines that snaked around the block at some locations — on the state’s first day of legal marijuana sales.

More than 2,000 people snapped up pre-rolled joints, flowers and edibles within hours at Ascend, a luxury cannabis shop in Rochelle Park, with customers declaring it’s high time Jersey lit up with premium-grade pot.

“This is the high-end retail of weed!” said Jason Davis, 38, a business development manager from Bloomfield. “This is much better than what I used to get from my old salesman. Much higher quality!”

New Jerseyans started lining up before dawn on Thursday at the RISE dispensary in Bloomfield to be among the first non-medical customers to buy cannabis legally in the Garden State.

Steve, 51, who declined to share his last name, made one of the first purchases after the shop opened at 6 a.m. He said he used to smoke a lot in his youth, but isn’t much of a cannabis user anymore. Still, he wanted to celebrate the “historic” occasion.

This day has been a longtime coming, since Jerseyites first voted to legalize recreational marijuana through a ballot measure in November 2020 and Gov. Phil Murphy later signed laws to launch the legal industry in February.

The first sales occurred before sunrise in Paterson and Bloomfield, where two RISE Dispensaries opened at 6 a.m. Tony Marrero from Garfield was the third person in line.

He said he had come to Paterson many times to buy weed, but this was the first time he was doing it legally, without fear of being arrested by the police officers stationed at the parking lot entrance.

“I’m excited, I feel like a kid in a candy store,” Marrero said. “Give me some of that, and some of that and a little of this.”