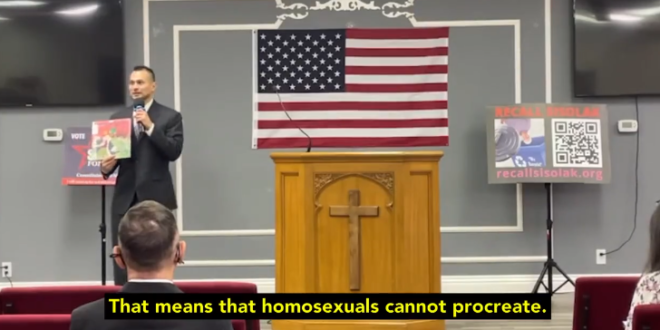 Nevada School Board Candidate: The US Constitution Commands Procreation, Therefore Being Gay Is Illegal

“I believe the Constitution. I believe in the way our founding fathers believed in this country: life, liberty, and the pursuit of happiness. That means that homosexuals cannot procreate. This goes against our Constitution.

“This goes against what parents want in the school district, and this is only one book out of thousands.” – Clark County, Nevada school board candidate John Carlo, confusing the Constitution for the Declaration Of Independence.

As you can see in the second clip below, Carlo also made national news back in February.

Carlo, who has posted photos of himself posing with the Confederate flag, has reportedly deleted his social media accounts since his latest claim went viral.

A man at the Clark County School Board meeting invoked Black History Month and implored them to teach about “Hulk Lawyer,” who he claimed was a Black Confederate soldier under “General Vines.”

There is no record of a Confederate General named Vines or anyone named Hulk Lawyer. pic.twitter.com/aaWeCYr9C4