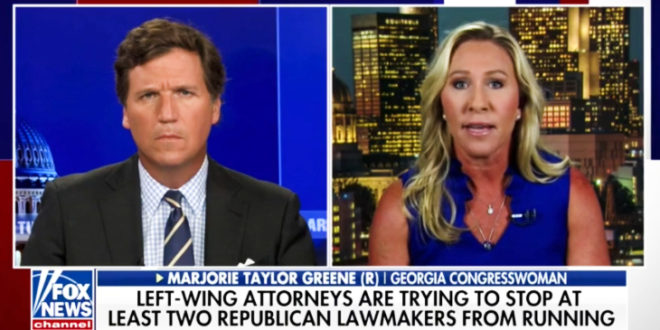 “These people hate the people in my district so much. They look down on them because they voted for me and sent me to Washington to fight for the things that most Americans care about, like secure borders, stopping abortion, protecting our Second Amendment, stopping the out-of-control spending in Washington, stop funding never-ending foreign wars.

“Now the progressives, the people that donate, the dark money groups, the 501(c)(3)s and the foundations, they have hired some attorneys from New York who hate the people in my district and don’t believe they should have the right to elect who they want to send to Washington, which is me.

“Now they have filed a lawsuit because they are trying to rip my name off the ballot and steal my district’s ability to re-elect me and send me back to Congress. These leftists, these progressives, who would rather have the judge making decisions instead of voters.

“They want to hand that over to them and not let the people in my district even have the right. The Republican party needs to fight harder, Tucker. There is something that I have learned and I think it is really important.

“If you can challenge any representative’s candidacy or an elected officeholder, I bet you we could round up some Republican voters who didn’t like Kamala Harris funding rioters, criminal rioters out of jail or Ilhan Omar, Cori Bush, or Maxine Waters inciting riots.

“I think there is another way to play this game.” – Marjorie Taylor Greene, last night on Tucker Carlson’s show.

She lists four Black women. Why do you think that is? https://t.co/g2hKFeIj3n