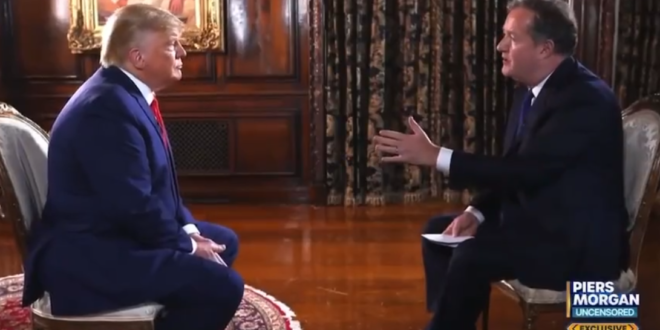 Morgan: Just Before My Interview With Enraged Trump, Nigel Farage Sent Him A List Of My Attacks On Trump

“Piers, we have a problem.” I was standing inside the gilded confines of Trump’s exclusive Mar-a-Lago private members’ resort and one of my production team was brandishing a document with a concerned look on his face. “This is a collection of quotes you’ve apparently said about President Trump in the past two years. Someone sent it to him in the last hour, and the quotes are not good. In fact, they’re really bad.”

Normally, he’d greet me with a cheery smile and the words, “How’s my champ?,” because I was his first “Celebrity Apprentice” on the series that made him a TV superstar. But this time, there were no such welcoming niceties. He was staring at me across his desk with undisguised fury, clutching the document titled “Piers Morgan Comments About President Trump.”

It’s actually worth your time because it features Trump lobbing furious F-bombs over the document. Whee!

At the very end of his column, Morgan speculates on the origin of the document, writing, “Mysteriously, it contains two random, very positive comparative quotes from British politician Nigel Farage, who now works as a presenter for my rival UK network GB News.”

.@piersmorgan writes: How all hell broke loose after my fiery showdown with Trump over his stolen election claims https://t.co/OcojmLhEgb pic.twitter.com/jmhGXJersc

Trump walks out on Piers Morgan during contentious interview pic.twitter.com/NKUTBblGDS

Previous Trump Stalks Out Of Piers Morgan Interview, Calls Him “Dishonest” After Being Confronted On Big Lie [VIDEO]
Next Hillary To Court: Toss Trump’s Lawsuit “With Prejudice”