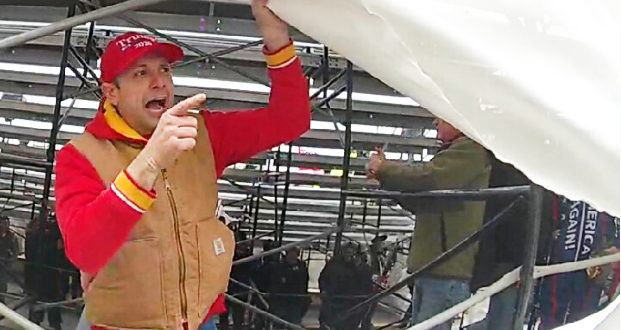 A man from Drexel, Missouri, located in Cass County, has been charged with assaulting law enforcement officers during the Jan. 6 insurrection at the U.S. Capitol.

Cale Clayton, 41, faces charges of “assaulting, resisting, or impeding officers, civil disorder, theft of government property, and related offenses,” according to a release from the U.S. Department of Justice.

According to court documents, Clayton can be seen in video footage and photographs allegedly grabbing police shields, among other things.

“Keep that door open. We’re gonna come in right there. You guys realize your president told us to be here. Your president! Hey, how does that make you feel? You’re defying your own fucking country. Your own country you’re defying.

“The shit has hit the fan, yes. Remember that. Who do you [inaudible]? The fucking city of D.C.? The fucking mayor? Or the president of the United States. Are you a patriot? Or are you a fucking yes man?”

“You guys realize your President told us to be here. Your President! Hey, how does that make you feel? You’re defying your own f**ng country. Your own country you’re defying” pic.twitter.com/u7nRY2rp2P

Cale Clayton allegedly told the FBI he was “attempting to return a police baton to the police.”https://t.co/MPoYjEBgTJ pic.twitter.com/cn1pq6hmZY

Charged for January 6: Cale Clayton of Missouri allegedly grabbed police riot shields outside the Capitol and stole a police baton.

“We are going to win. You don’t have enough for all of us,” he told police per court docs, “You guys realize your President told us to be here.” pic.twitter.com/mXeDMq12Bt

Missouri Man Arrested on Charges for Assault on Law Enforcement Officers During January Sixth Capitol Breach: Cale Clayton of Missouri has been arrested for assaulting law enforcement officers during the breach of the U.S. Capitol on January 6, 2021. https://t.co/nIdSL5nnzU