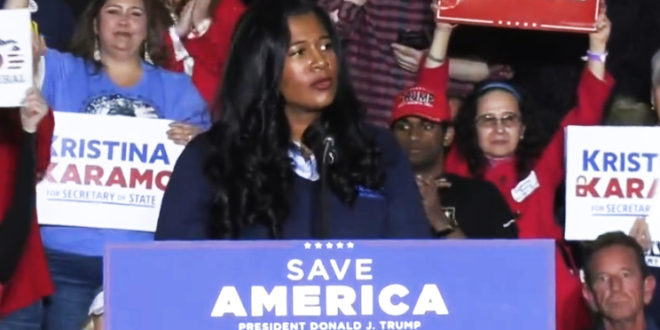 Kristina Karamo, a community college professor who rose to prominence after claiming she saw election fraud in Detroit in the last presidential race, won the three-person race for secretary of state with about 67% of the vote at Saturday’s GOP endorsement convention in Grand Rapids.

At this weekend’s GOP convention, the party voted resoundingly to support former President Trump’s false claims about the 2020 election. About 2,000 delegates from across the state participated in the vote.

The convention was seen by many as the first major test of Trump’s influence over the 2022 elections. Trump’s former campaign attorney Rudy Giuliani attended the convention, as well as MyPillow founder Mike Lindell, who has become a leader in the election denial movement.

Karamo has been endorsed by Trump.

Michigan does not hold primaries for down-ballot state officials such as secretary of state. The parties’ nominees proceed directly to the general election.

Karamo is viciously anti-LGBTQ and has said that gay people are working to “normalize pedophilia.”

Last fall she declared, “There is no such thing as a child with two mommies or two daddies. That is factually incorrect.”

Trump-endorsed political newcomer Kristina Karamo was selected for the Republican party’s endorsement for Michigan Secretary of State ahead of the Nov. 8, 2022 general election. https://t.co/HKtOSNmaVJ

Dear Authoritarian-Leftist, your bogus and scripted arguments will not work with me. I’ve heard them all before. Christians in government frustrate your plans about sharing the joys of sex with elementary kids and aborting kids 40 weeks old in the womb.

We need to be seriously concerned about non-parental adults obsessed with discussing sex WITH kids. The sexual revolution has destroyed society, offering only temporary fun and personal validation. Now our society has AIDS, a high divorce rate, and men dominating women’s sports.

First of all, then, I urge that supplications, prayers, intercessions, and thanksgivings be made for all people, for kings and all who are in high positions, that we may lead a peaceful and quiet life, godly and dignified in every way. – 1 Timothy 2:1-2