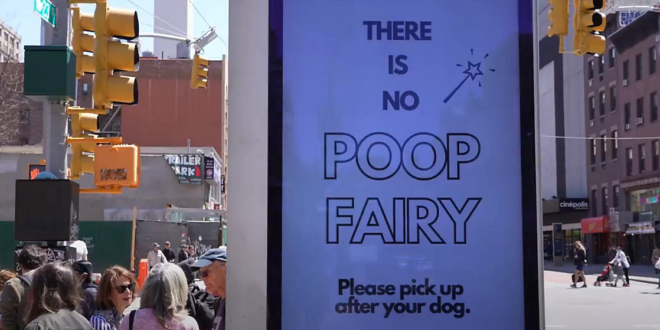 City officials in Manhattan are warning dog owners they’ll have to pay up if they don’t pick up as residents complain of dog poop piling up on city sidewalks.

City Councilman Erik Bottcher, who represents parts of Manhattan including Chelsea and Hell’s Kitchen, said on Friday that the Sanitation Department’s Canine Task Force will be assigning more agents to his district to enforce the “pooper scooper” law.

Bottcher’s office said they will also begin a public awareness campaign. The words “There Is No Poop Fairy” will be displayed on LinkNYC kiosks across Council District 3, and messaging will be shared on social media too.

Bottcher, who is openly gay, was former Gov. Andrew Cuomo’s LGBT liaison during the 2011 marriage equality battle. Last year he was elected to the City Council seat previously held by former City Council Speaker Corey Johnson, for whom he was chief of staff.

There is no Poop Fairy. 🪄

Your dog’s mess is not going to magically disappear.

Please pick up after your dog!

It’s the right thing to do. pic.twitter.com/crtvTuQ4dK

FYI the “Poop Fairy” doesn’t exist. A city councilman says residents are fed up with dodging dog poop on sidewalks like landmines. And now the Sanitation Police are ready to hit scofflaws with $250 tickets. https://t.co/ahy01NqMYg

Previous TX Gov’s $4B Border Stunt Found No Drugs Or Migrants
Next Newsmax Host: “Swamp Snake” McCarthy “Wet His Pants” Over “One Riot Facilitated By The Democrats”