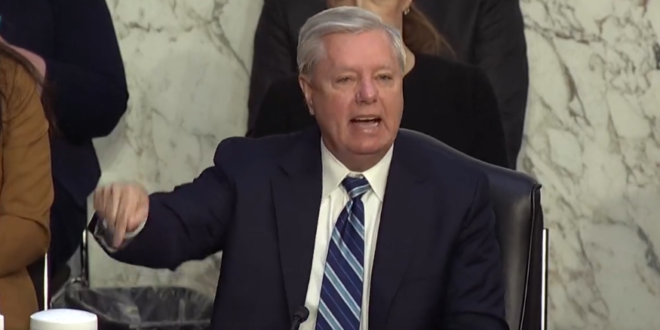 Lindsey Graham: If Republicans Controlled The Senate, Ketanji Jackson Would Never Have Gotten A Hearing

“If we get back the Senate and we’re in charge of this body and there is judicial openings, we will talk to our colleagues on the other side. But if we were in charge, she would not have been before this committee. You would have had somebody more moderate than this. So, I want you to know right now, the process you started to go to a simple majority vote is going rear its head here pretty soon when we’re in charge. Then we’ll talk about judges differently.” – Sen. Lindsey Graham, this afternoon.

Sen. Lindsey Graham (R-SC) attempts to explain voting ‘no’ on Judge Jackson’s Supreme Court nomination despite voting to confirm her in the past:

“If you win an election, I expect you to pick somebody I wouldn’t support on the court.” pic.twitter.com/kh2C9bZT0N

Sen. Lindsey Graham claims he only previously voted to confirm Judge Ketanji Brown Jackson to the D.C. Circuit because it was the ‘game’ he was expected to play following an election pic.twitter.com/bs7CYWWK3V