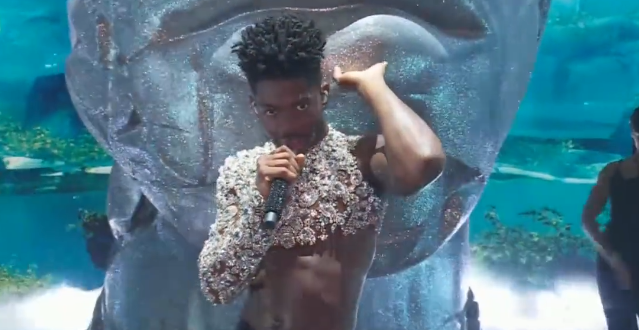 Lil Nas X hasn’t forgotten his haters — even as he’s breezing right past them. During the 64th annual Grammy Awards on Sunday night in Las Vegas, the singer-rapper, 22, performed a medley of hits off of his latest album, 2021’s Montero.

After performing “Dead Right Now” in a sparkling black cape-like outfit, Lil Nas X moved backstage while a video montage played for viewers highlighting the controversy surrounding the music video for his much-talked-about single “Montero (Call Me by Your Name).”

Along with tweets and news articles flashing onscreen from those who criticized the song and video, voices of various newscasters could also be heard panning “Montero” for its risqué religious and sexual themes.

can’t believe i lost all my grammys. i am now no longer gay!

.@LilNasX got what we’re waiting for. #GRAMMYs pic.twitter.com/Y5oG0PU3zV