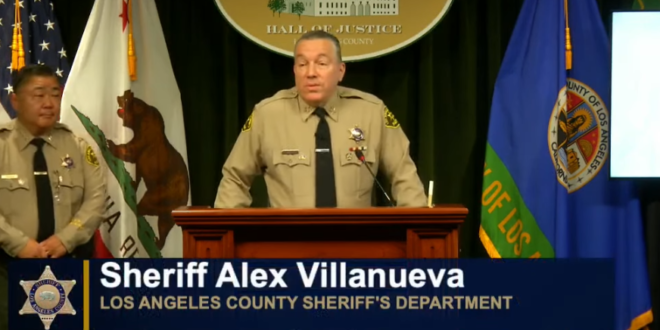 The Los Angeles County sheriff on Tuesday disputed allegations he orchestrated a cover-up of an incident where a deputy knelt on a handcuffed inmate’s head and said a Los Angeles Times reporter who used leaked documents and video to first report on the case is part of his criminal investigation.

Sheriff Alex Villanueva’s comments at a news conference Tuesday brought immediate criticism from the newspaper’s leadership and First Amendment advocates. Hours later, the sheriff clarified in a series of tweets that his agency has “no interest in pursuing, nor are we pursuing, criminal charges against any reporters.”

The paper’s general counsel sent a letter to the sheriff protesting the investigation and the top editor condemned Villanueva’s remarks, calling it an illegal “attempt to criminalize news reporting.”

In July 2021 he appeared here when he refused to enforce Los Angeles County’s indoor mask mandate.

In October 2021 he declared that he would not enforce the “political” vaccine mandate for police department employees.

Los Angeles County sheriff disputes allegations he orchestrated a cover-up of an incident where a deputy knelt on a handcuffed inmate’s head, and says a Los Angeles Times reporter who first reported on the case is part of his criminal investigation. https://t.co/hEH8I6tn8b

The incident has been handed over to District Attorney @GeorgeGascon, who will ultimately decide whether Douglas Johnson’s use of force was illegal. You can read. @AleneTchek‘s important work here:https://t.co/CysrVJhuU1

Hours after holding a press conference announcing a reporter was part of a criminal probe for breaking news about his alleged role in covering up for an abusive deputy, LA’s sheriff insisted he wasn’t “pursuing criminal charges against any reporters.” https://t.co/3zvjYydu85