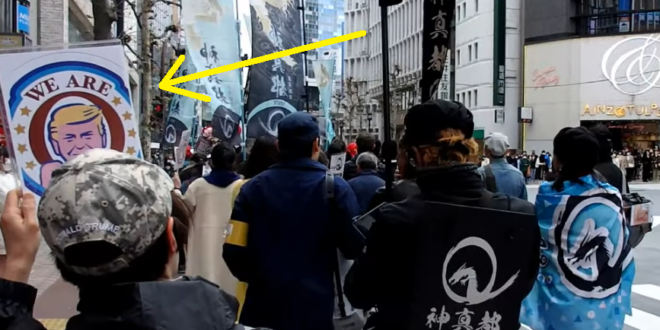 A leader of a Japanese QAnon group that believes COVID-19 was made up has been arrested for allegedly trespassing into a clinic offering vaccinations for children in Tokyo.

Hiroyuki Kuraoka, a 43-year-old anti-vax activist and former actor, was detained on Wednesday after he entered the facility earlier this month and protested the COVID-19 vaccinations it provided. Kuraoka leads YamatoQ, which describes itself as a Japanese version of QAnon and claims to want to restore the “health and safety of young children.”

YamatoQ claims that Trump “saved many children” from Satanists. It also falsely suggests that “COVID-19 does not exist” and that the vaccine contains a harmful pathogen.

Roughly 10 YamatoQ members, including Kuraoka, barged into the clinic, shouting, “Vaccination is a crime” and demanding to talk to the clinic’s director, according to the police. Four people believed to be members of the group were arrested on the spot on April 7.

The group has been waging a campaign against COVID-19 inoculations in various parts of Japan, holding rallies and saying the coronavirus does not exist. In March, they disrupted vaccinations in sites including Tokyo Dome.

A Japanese QAnon leader and former actor that believes COVID-19 was made up has been arrested for allegedly trespassing into a clinic to inoculating children against the coronavirus in Tokyo. https://t.co/GIAXm32nQ2

Previous Gaetz Accuses Cheney Of Secretly Recording McCarthy
Next New McCarthy Audio: Trump Told Me He Bears Some Responsibility For The Riot, “I’ve Had It With That Guy”