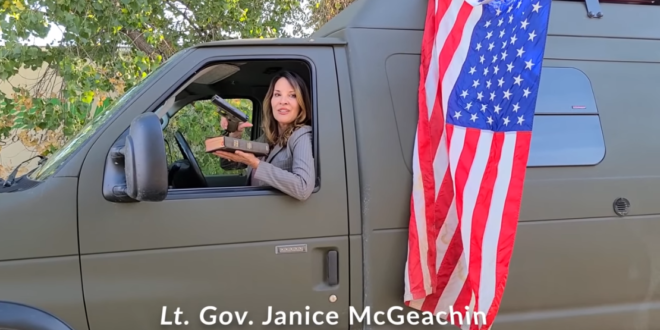 Idaho Lt. Gov. Janice McGeachin, who is running for governor, announced that she is appearing with Stew Peters for a political rally next month.

Peters is a white nationalist who has said that he supports Russian President Vladimir Putin, who, he claims, is “more honest than anyone in our government”; has claimed that Russia is “the only country that’s not under the thumb of the criminal banking cabal”; has popularized the conspiracy theory that COVID-19 is actually a synthetic form of snake venom; and has repeatedly called for Dr. Anthony Fauci to be executed.

Peters is behind the recently released COVID-19 conspiracy theory film Watch the Water which, as PolitiFact summarized, “ridiculously claims that the coronavirus is not a virus, but a synthetic version of snake venom that evil forces are spreading through remdesivir, the mRNA COVID-19 vaccines and drinking water to ‘make you a hybrid of Satan.’”

Read the full article. McGeachin is endorsed by Trump.

Idaho Lt. Gov. Janice McGeachin now says, “Yes, I did know who I was talking to” when she addressed the white nationalist AFPAC conference and she stands by it: “I’m not going to back off from the opportunity to talk to other conservatives … about America First policies.” pic.twitter.com/EcbL4onfLC

I look forward to the spirited conversation about the future of @IdahoGOP in the upcoming gubernatorial primary. Also, isn’t this the owner of the disinfecting cubes company, Don Ahern, introducing Janice in IF? #idpol pic.twitter.com/qamje5B4E7

Previous Macron Warns Marine Le Pen That Her Proposed Ban On Muslim Head Scarves In Public Would Spark “Civil War”
Next Loony Loomer: “Do I Just Not Exist? Am I Invisible?”