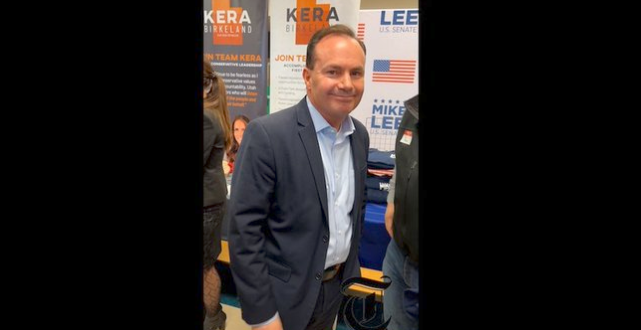 GOP Sen. Mike Lee Flees Reporter Demanding To Know Why He “Lied” About His Role In Election Overturn Plot

Sen. Mike Lee (R-UT) made a quick escape when asked about recently published text messages revealing his involvement in the plot to overturn the 2020 election.

In his conversation with Meadows, Lee attempted to get Sidney Powell in a room with Trump, claiming she had a strategy to “keep things alive and put several states back in play” following President Joe Biden’s election win.

Salt Lake Tribune reporter Bryan Schott confronted Lee about the texts at the Summit County Republican Party Convention in Kamas, but was blocked by the senator’s staffers.

In the video, you can see Sen. Lee’s staffers and others blocking my way to keep me from getting close to him.

What you can’t see is the guy behind me grabbing my backpack and pulling me backward to prevent me from moving #utpol https://t.co/NweqZruCDe