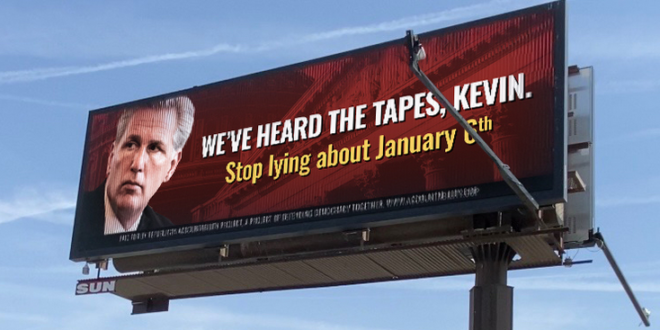 A conservative group erected six billboards in House Minority Leader Kevin McCarthy’s (R-Calif.) home district after he was caught in a lie. “We’ve heard the tapes, Kevin,” the billboards from the Republican Accountability Project (RAP) say. Last week, McCarthy denied a report that he had privately told other Republicans he would urge Donald Trump to resign in the days after the Jan. 6, 2021 assault on the U.S. Capitol that was carried out by supporters of the then-president.

Hey @GOPLeader, one of your constituents sent us this picture. If you see one yourself, tag us and we’ll retweet it. pic.twitter.com/fyCfq6nmlH