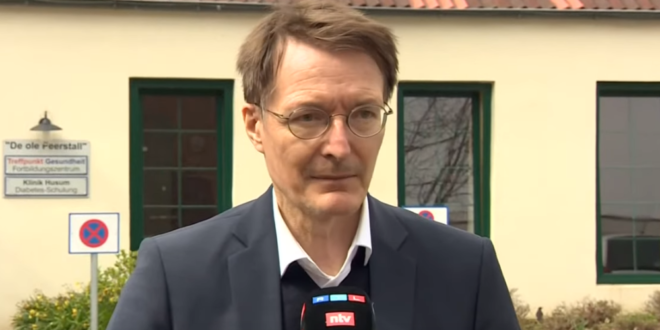 Investigators in the western German state of Rhineland-Palatinate said on Thursday they had arrested four members of a right-wing extremist chat group that was seeking to bring down Germany’s democracy. Those arrested were German nationals linked to the COVID-denier protest scene and the “Reichsbürger” movement, the investigators said.

State prosecutors in Koblenz and the State Criminal Police Office (LKA) in Mainz said that a group calling itself the “Vereinte Patrioten” (United Patriots) planned bomb attacks on Germany’s energy infrastructure. One other alleged plan by the group was also to abduct Health Minister Karl Lauterbach [photo], among other public figures.

Police on Thursday searched 20 residential properties and confiscated dozens of weapons, including a Kalashnikov assault rifle and weapons.

They said they also found foreign currency, gold bars, and silver coins to be used to fund the foiled plan that was “intended to cause civil war-like conditions and ultimately overthrow the democratic system in Germany,” the state prosecutor said in announcing the arrests.

Police also found a stash of fake vaccination certificates and negative COVID tests that would have been needed to gain entry to carry out the plot.

Police are searching for a fifth suspect after four people were arrested for what’s described as an elaborate plot to cripple Germany and spark a civil war over COVID restrictions.https://t.co/LlMk0Oeyy5

Protests against coronavirus measures in Germany have at times drawn tens of thousands of demonstrators, including vaccine skeptics, neo-Nazis and members of the far-right AfD party.

Health Minister @Karl_Lauterbach has confirmed he had to receive police protection. pic.twitter.com/O6emACQE15