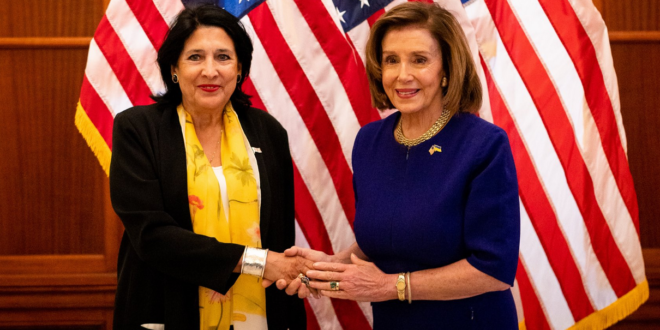 Georgian Leader Presses For US Support Against Russia

Georgia President Salome Zourabichvili is on a mission in Washington to build support for her country as a key bulwark in case Russia seeks to expand its aggression beyond Ukraine.

In an interview with The Hill, Zourabichvili said that she believes Moscow doesn’t have the capacity to move its military to launch another operation, but that “it still can play on the nerves, and that’s what it’s doing in Transnistria, trying to raise the fears, destabilize the population.”

“That’s the way that Russia is showing that even if it’s concentrated on Ukraine, it does not forget Moldova, and [Georgia]. So again, our Western partners should, on their side, not be forgetting Georgia,” she said.

Thank you @RepJoeWilson for these strong words of solidarity that show the bipartisan support for Georgia, Ukraine and Moldova.

“America supports the sovereignty of Georgia and will stand with President Zourabichvili for the freedom of Georgia.” pic.twitter.com/hDV7Zy6ZwB

Today, I had the official privilege of welcoming Her Excellency Salome Zourabichvili, President of Georgia, to the U.S. Capitol.

Congress proudly stands with the people of Georgia, and we remain unwavering in support of their sovereignty in the face of Russian aggression. pic.twitter.com/UFfDJWVGCG

FP spoke with Georgian President Salome Zourabichvili about what the war in Ukraine means for Tbilisi, Georgia’s unrelenting NATO ambitions, and the country’s decision not to join Western sanctions on Russia. https://t.co/DGAKSaqKmr

US Senator Chris Coons expressed his hope the #EU would “swiftly” welcome #Georgia as a new member during a joint press point with Georgian President Salome Zourabichvili in Tbilisi on Thursday. https://t.co/0TymA2NPCW