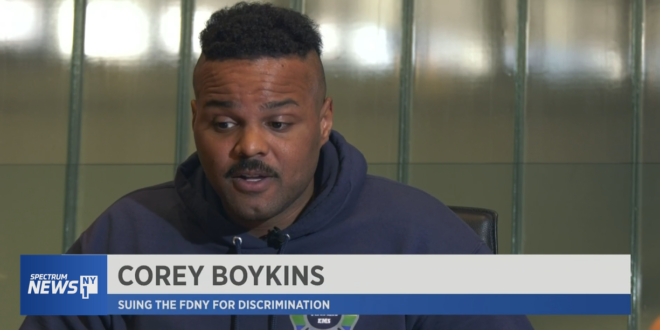 Gay Firefighter Sues FDNY, Says He Was Told He Could Be “Cured” And He Should Start Sleeping With Women

A gay firefighter has filed a lawsuit against the city, the FDNY and the lieutenant who served as the chief diversity officer, alleging harassment and hostility. “I was at my lowest,” Corey Boykins told NY1 exclusively. “I was kind of just trying to still have respect for the job, because I do love the job. I do love the job. I was trying to navigate how I could stop this without losing my job.”

The firefighter detailed in a Brooklyn Supreme Court complaint how he sought help from the department’s then-chief diversity and inclusion officer, but was instead told that he should sleep with both men and women and that others had been “cured” of their homosexuality. “Immediately, the first thing was: I don’t belong in the firehouse and basically being gay was a choice, having sex is about procreation,” Boykins alleged.

Read the full article. There’s a video report at the link.

Corey Boykins says he was told “basically being gay was a choice, having sex is about procreation,” adds the conversation also included “hand diagrams” demonstrating heterosexual intercourse https://t.co/VLmRm2Zb0T via @NY1