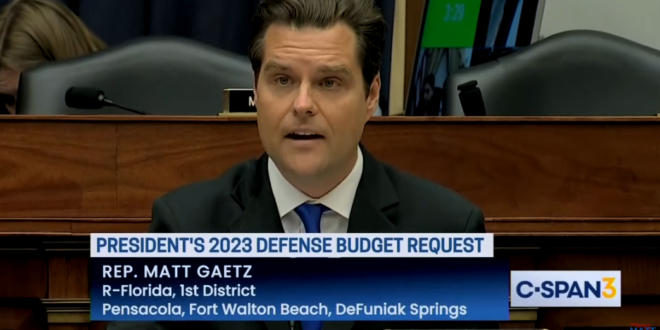 Defense Secretary Lloyd Austin and Rep. Matt Gaetz got into a heated argument during Tuesday’s House Armed Services hearing after the Florida Republican accused the Pentagon of being too focused on “wokeism” and not defense.

Austin charged that Gaetz appeared to be “embarrassed for his country” by questioning the US military’s capability, and the two men shouted over one another at several points.

“This is the most capable, most combat critical force in the world, it has been and it will be so going forward, and this budget helps us to do that,” Austin said. “Not if we continue down this path. Not if we continue to embrace socialism,” Gaetz charged.

Gaetz enquired about a lecture delivered at the US National Defense University by French economist and author Thomas Picketty entitled “Responding to China: The Case For Global Justice and Democratic Socialism”.

“Why should American taxpayers fund lectures at the National Defense University that promote socialism as a strategy to combat China?” he asked.

When Mr Austin, who oversees the entire US Department of Defence, told the Florida Republican that the NDU is an “academic institution” and said he did not know of the lecture, Mr Gaetz called his lack of knowledge about specific coursework at the school “surprising” and asked if he agreed that “embracing socialism” would not be “an effective strategy to combat China”.

Rep. Matt Gaetz: “No. I am embarrassed by your leadership!” pic.twitter.com/U3H1S99GTv

Defense Secretary Lloyd Austin: “Has it occurred to you that Russia has not overrun Ukraine because of what we’ve done? And our allies have done? Have you ever even thought about that?” pic.twitter.com/Wigdb37aSg

Previous House Candidate Calls For Smashing Car Windows Of Antifa Activists: “I Will Will Smith Them In A Heartbeat”
Next DeSantis Spox: If LGBTQs Leave The State Over Don’t Say Gay, Then “Florida Will Be Better Off Without Them”