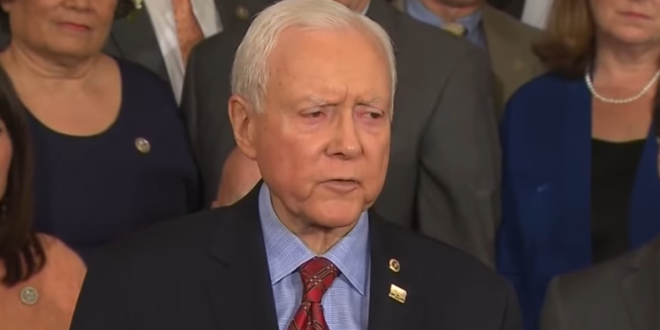 Retired Sen. Orrin Hatch, the longest-serving Republican senator in U.S. history and the longest-serving from Utah, died Saturday at age 88. Hatch was first elected in 1976 and served 42 years in the Senate until retiring after his seventh term in 2019.

Prior to his election to the Senate in 1976, Hatch, a Salt Lake lawyer, had held no public office.

From January 2015, when the G.O.P. took control of the Senate, until his retirement, Mr. Hatch had been its president pro tempore — making him by law third in the line of succession to the presidency, after the vice president and the speaker of the House. It was just a whiff of presidential power, as those ambitions had long ago sputtered out.

By his final term, polls indicated that Utah voters believed it was time for Mr. Hatch to go. The Salt Lake Tribune facetiously named him “Utahn of the Year” in December 2017, and in an accompanying editorial had scathingly characterized his leading role in passage of the Trump tax cuts, which favored the rich, as an “utter lack of integrity.”

Hatch announced in January 2018 that he wouldn’t seek re-election, shortly after his local newspaper The Salt Lake Tribune called for him to step down.

Ahead of the Hatch’s retirement announcement, then-President Trump urged him to stay in Washington. During a 2017 event in Utah, Trump called Hatch “a true fighter” and said he hoped the Republican would continue to serve “in the Senate for a very long time to come.”

Hatch last appeared on JMG in December 2018 when, in his Senate farewell speech, he called for “protecting LGBTQ individuals from invidious discrimination.”

Earlier that year, he marked Pride Month with a floor speech in which he spoke about the suicide risk for LGBTQ youth and urged passage of his bill for a national suicide hotline.

In 2017, he issued a press release in which he condemned Trump’s anti-trans edict, saying, “No one should ever feel less because of their gender identity or sexual orientation.”

All of that came after decades of opposition to all aspects of LGBTQ civil rights, starting in 1977 when as a freshman senator he called for banning homosexuals from teaching at public schools, comparing gay teachers to Nazis.

Hatch went on to support the Defense Of Marriage Act and voted against the Matthew Shepard Hate Crimes Act.

In 2010, Hatch appeared to waver on the repeal of Don’t Ask, Don’t Tell, saying that soldiers “shouldn’t have to lie about being gay.” One day later he backpedaled furiously in the face of outrage from right wing groups.

His first hint of softening on LGBTQ issues came in 2013 when he was among the ten GOP senators who voted for the Employment Non-Discrimination Act.

.@KarenPence & I were saddened to hear of the passing of Orrin Hatch, a true statesman who represented the best of UT & America. As the longest serving Republican Senator in history, he dedicated decades of his life to public service & we’ll always be grateful for his leadership. pic.twitter.com/s7FAYp8kU3

I am deeply saddened to learn of the passing of my friend and former colleague Orrin Hatch. Elaine’s and my prayers are with Orrin’s family and everyone who will miss this remarkable man. My full statement: pic.twitter.com/pFqllyKe1E

Devastated to learn of the loss of Sen. Orrin Hatch. He was a cherished friend. I met my husband while he worked for the Senator. We will miss him dearly. He was a statesman that represented the best our country has to offer. Please pray for his family.https://t.co/pZus9vK9nP

Orrin Hatch, longest-serving @GOP Senator, is dead. In 2018 he acknowledged that marriage equality was inevitable. It was a far cry from decades of insisting that LGBTQ+ folks are second-class citizens; a form of bigotry his GOP colleagues have reembraced. https://t.co/4Yg3bLnmFz