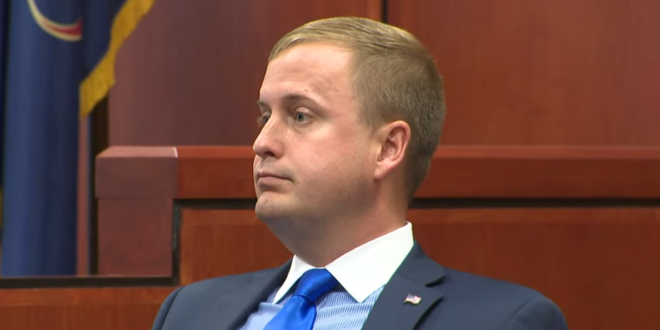 A former Idaho lawmaker was convicted Friday of raping a 19-year-old legislative intern after a dramatic trial in which the young woman fled the witness stand during testimony, saying “I can’t do this.”

The intern told a Statehouse supervisor that Aaron von Ehlinger raped her at his apartment after the two had dinner at a Boise restaurant in March 2021. He said the sex was consensual. At the time, von Ehlinger was a state representative from Lewiston, but he later resigned. Von Ehlinger, 39, was found guilty Friday of rape.

When the allegations became public — largely because of the legislative ethics investigation — the victim faced unrelenting harassment from some of von Ehlinger’s supporters. Her name, photo and personal details about her life were repeatedly publicized in “doxxing” incidents.

As I reported last year Ehlinger was considered a fugitive when charges were filed and was arrested upon his return from Central America.

In 2020 he was appointed to the legislature by GOP Gov. Brad Little upon the death of Ehlinger’s predecessor.

BREAKING: A former Idaho lawmaker has been convicted of raping a 19-year-old legislative intern after a dramatic trial in which the young woman left the witness stand during testimony, saying “I can’t do this.” https://t.co/h8qrgsiWy6