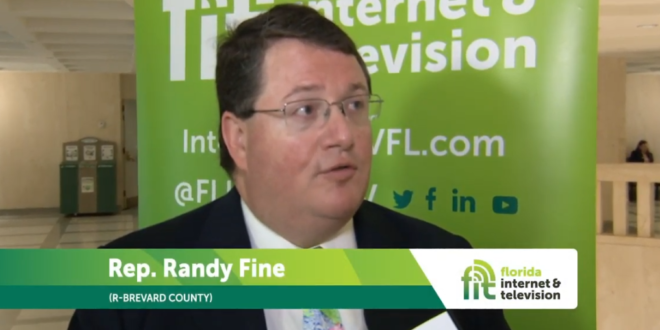 Florida Rep. Randy Fine threatened to interfere with state funding for the Special Olympics and the city of West Melbourne last week over a personal feud with Brevard County School Board member Jennifer Jenkins, according to a series of text messages obtained by FLORIDA TODAY. The reason: city police officials had invited Jenkins to participate in a Special Olympics fundraising event by the West Melbourne Police Department, but had neglected to invite Fine.

“I’m not going to jack shit where that whore is at,” he wrote. “You guys will have to raise a lot of money given that’s who you want to honor, not the person who got you money in the budget.” A city leader said Fine later tried to block the release of the text messages through a public records request and wanted a city attorney who was overseeing the request to be fired. The $112.1 billion state budget included $1 million in various appropriations for the Special Olympics.

Read the full article. There’s much more. Fine is the sponsor of the bill that stripped Disney’s self-government status.

Florida Republican Rep. @VoteRandyFine threatened to block state funding for the Special Olympics because he wasn’t invited to an event and a school-board member he doesn’t like was. Fine is the same guy who suggested protestors should be run over.https://t.co/oE6QDEcWuQ

Rep. Randy Fine just went down a long list of companies and universities who “messed with” him and the legislature and how he made them pay. Wow this was a crazy ass meeting

Florida state Representative Randy Fine was a cosponsor of the state’s new anti-cyberbullying law. Now, the Florida Department of Law Enforcement is investigating him for violating the very law he helped pass. https://t.co/Qc4whVaW3p

NEW: Jewish GOP FL State Rep suggests that all Palestinians are terrorist animals, and beneath “pigs, rats, and snakes,” which are considered vermin in the Hebrew faith#TheUndercurrent pic.twitter.com/T74vh7MEhv

We asked Brevard County Public Schools. Their spokesperson denied that such a position exists and said:

“We do not teach critical race theory. It is not in the curriculum.” pic.twitter.com/5oUTEyXBSy

This is what happens when the Republicans in Florida are in power. They bully and throw tantrums like @VoteRandyFine He wants them to lock me up bc of my peaceful sit-in. Well he threatens to get funding vetoed when his feelings are hurt. #FLPol #disney https://t.co/RkNXKswlpo

“Randy Fine has taken over $20K from Disney in political contributions. This woke money he has not returned,” says @annaforflorida. “If you want to talk about free markets, I’m your girl…Florida Republicans want Disney to get back in line, continue donating to their coffers.” pic.twitter.com/1tQtATDpdX

Previous MI GOP Nominates QAnon Nutbag For Sec Of State
Next Warren: McCarthy Is “A Liar And A Traitor” [VIDEO]