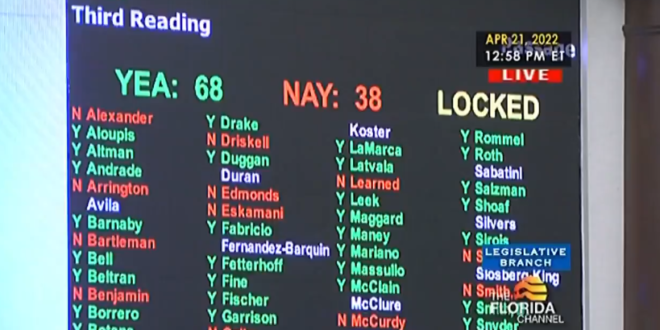 The Legislature has approved a controversial congressional map from Gov. Ron DeSantis, set to take effect ahead of the 2022 midterms unless a court quickly decides otherwise. The House on Thursday picked up the reapportionment bill passed the prior day by the Senate. The lower chamber of the Legislature passed the bill through a party-line vote of 68-34.

That only occurred after a protest disrupted proceedings. As Democratic debate time ran out, Rep. Yvonne Hayes, a Gainesville Democrat, was comparing the fight for minority access seats to the Civil Rights movement.

As her mic was cut, Black lawmakers including Reps. Angie Nixon, of Jacksonville, and Tray McCurdy, of Orlando, began a sit-in on the floor, both revealing T-shirts that read “Stop the Black Attack.”

We’re being told on the House Floor that we can’t use the racist history of our nation as a reason why you should vote no on the maps because it might impune colleagues who are voting yes.

It might feel uncomfortable for some, but history is relevant when it’s repeating itself.

Florida House Democrats, opposed to the GOP-led Legislature’s rubber stamping of Gov DeSantis congressional map that diminishes a Democratic minority-heavy seat— stop the session with a sit-in & a prayer-in

Florida House Dems sing “We Shall Overcome” to stop a meeting where Republicans led by Florida Governor Ron DeSantis want to gut black representation in Congress with maps they KNOW are illegal. pic.twitter.com/yJGdbza9JW