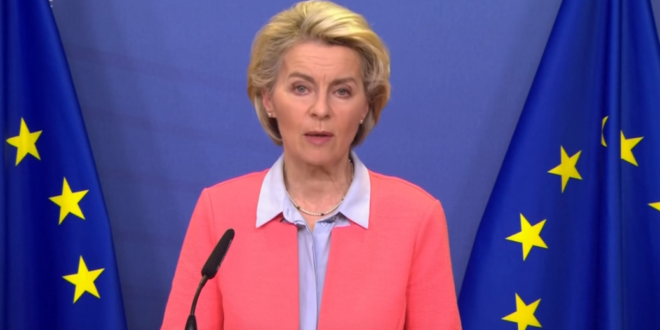 European Commission chief Ursula von der Leyen said the civilian deaths in the Ukrainian town of Bucha showed the “cruel face” of Russia’s army and pledged to try to speed Ukraine’s bid to become a member of the European Union.

During a visit to Bucha, where forensic investigators started to exhume bodies from a mass grave, von der Leyen looked visibly moved by what she saw in the town northwest of Kyiv where Ukrainian officials say hundreds of civilians were killed by Russian forces.

Handing President Volodymyr Zelenskiy a questionnaire which will form a starting point for a decision on membership, she said: “It will not as usual be a matter of years to form this opinion but I think a matter of weeks.”

EU Commission President Ursula Von Der Leyen says the EU will accelerate Ukraine’s membership. “It’s unclear exactly what this means, because just over a month ago was the first time we heard Ukraine wanted to join the EU,” says Bloomberg’s Francine Lacquahttps://t.co/ghmOIPoxwG pic.twitter.com/oYWpD62HSA

EU Commission President Ursula von der Leyen, High Representative of the EU for Foreign Affairs and Security Policy Borrell and Ukraine’s Prime Minister stand next to bodies that were exhumed from a mass grave as they visit Bucha, April 8, 2022. REUTERS/Valentyn Ogirenko pic.twitter.com/NAPgnL4O3v

‘The unthinkable has happened here’

The horrors found there show the “cruel face of #Russia‘s 🇷🇺 army” she said ⤵️ pic.twitter.com/sMfmtLw93D