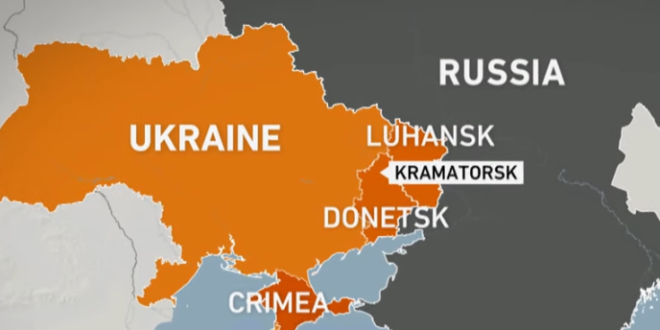 At least 39 people were killed and 87 wounded on Friday when two rockets hit a railway station in eastern Ukraine packed with evacuees, Ukrainian authorities said, as the region braced for a major Russian offensive.

Pavlo Kyrylenko, governor of the Donetsk region, said thousands of civilians had been at the station at the time the rockets struck, in what he described as a deliberate attack. Many of the wounded were in serious condition, he said.

Ukrainian President Volodymyr Zelenskiy said no Ukrainian troops were at the station. “Russian forces (fired) on an ordinary train station, on ordinary people, there were no soldiers there,” he told Finland’s parliament in a video address.

The Kramatorsk train station in eastern Ukraine was hit with a Tochka-U short-range ballistic missile as “thousands of peaceful Ukrainians were waiting to be evacuated,” President Volodymyr Zelensky said.https://t.co/2Ve47SvBvn pic.twitter.com/4smKbYDcPN

“Dozens” are dead and injured after missile strikes on Kramatorsk train station in eastern Ukraine, the head of Donetsk regional military administration said this morning. Thousands of people were at the station during the strikes, trying to evacuate. https://t.co/hwih4DNRrR

President Zelenskyy has called Russia an “evil that has no limits” following a rocket attack on a train station in eastern Ukraine that killed at least 35 people. pic.twitter.com/SWpL7Zno3D