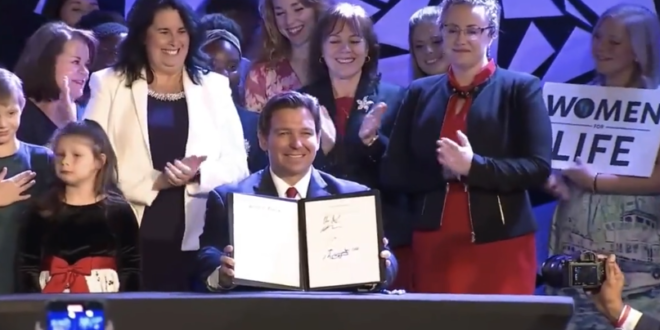 Gov. Ron DeSantis held a news conference in Osceola County on Thursday, where he signed Florida’s bill banning abortions after 15 weeks into law. He spoke from Nacion de Fe in Kissimmee, where signs read, “Florida is pro-life.”

The legislation specifically says a doctor may not perform an abortion “if the physician determines the gestational age of the fetus is more than 15 weeks.”

It does not grant exemptions for rape, incest or human trafficking. Exceptions include if the abortion is necessary to save a mother’s life or to prevent serious injury to the mother. Attendees at the Thursday event praised the governor, calling him “the most pro-life governor in the country.”

BREAKING: Florida Gov. Ron DeSantis has signed a 15-week abortion ban into law. The move comes amid a growing conservative push to restrict abortion ahead of a U.S. Supreme Court decision that could limit access to the procedure nationwide. https://t.co/gk5yaOvX46

DeSantis signed the law at a church. Because no separation of church and state in Florida. And no exception for rape or incest in this evil law depriving women of their own healthcare. https://t.co/WzFP3HF8to