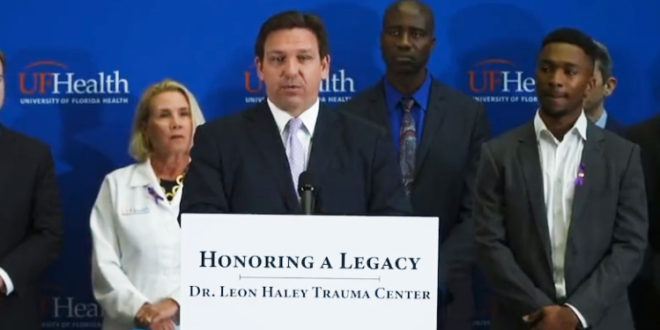 Gov. Ron DeSantis showed support for the Florida Education Commission as state leaders recently rejected 41% of the proposed math textbooks for the next academic year.

“Math is about getting the right answer. It’s not about how you feel about the problem or introducing some of these other things,” DeSantis said. “There’s a right answer and there’s a wrong answer.”

“Parents have been working very hard with their elected representatives to make sure that what they want to have taught in schools, and how they would like their children to be protected in schools from ‘woke ideology.’ There are laws that protect families from that,” Tiffany Justice, the co-founder of Moms for Liberty, told WPBF 25 News.

Three days after his Admin was challenged to produce examples of CRT from his banned list of math textbooks, Desantis still has nothing, except to say that they contain “some of these other things.” (Follow the money on which publishers get the contracts). pic.twitter.com/KxMyitV6ga

Show of hands: Who thinks Florida officials have banned math books because math is hard and makes these people feel dumber than they already are? https://t.co/w5GOgIPPLz

Math problems banned by the state of Florida:

Florida has rejected 42 math textbooks, saying they used “prohibited topics or unsolicited strategies.” The state did not specify which content was objectionable, but Gov. Ron DeSantis on Monday criticized the presence of “social and emotional learning.” https://t.co/fcsoUkcsVD

Reminder that as the Governor demonizes math books he just signed a 15 week abortion ban into law, is actively working to pass unconstitutional district maps that erase Floridians & is doing nothing to address the rising cost of rent. So much of this is distraction & deflection.

In Florida, the state of the gut-wrenching Marjorie Stoneman Douglas HS massacre, weapons of mass destruction are not a threat, according to its leaders

Books about arithmetic and geometry are 🤦🏻‍♀️https://t.co/voE6Y3MaCB

This is math homework from a public school district in Missouri. How does this help kids learn algebra, exactly? No wonder China is winning…

Here’s the picture of the actual math work. The school district altered it to fit their narrative. And now the governor of Florida is using the doctored work to justify banning math books. @AnnaForFlorida pic.twitter.com/ameu7u5Bko