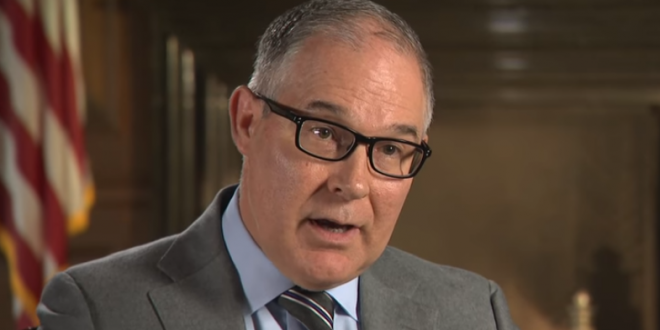 Former Oklahoma Attorney General Scott Pruitt is running for U.S. Senate. Also the former head of the EPA appointed by Donald Trump, Pruitt has filed to campaign for the U.S. Senate seat being vacated by Sen. Jim Inhofe.

Pruitt represented Tulsa and Wagoner counties in the Oklahoma Senate from 1998 until 2006. He served two terms in the Attorney General’s Office after being elected first in 2010.

Pruitt was brought on to serve as EPA chief at the beginning of the Trump presidency. He resigned in 2018 after months of scandals regarding his spending habits and management decisions, which led to federal probes.

The former EPA chief also came under fire for attempting to use his position to get his wife a job as a Chick-fil-A franchisee, enlisting a top aide to find his wife a job through Republican donors, and sending employees to buy him snacks during the work day.

Pruitt left his post as state attorney general to lead Trump’s aggressive anti-regulation agenda at the EPA. His tenure was laden with ethics scandals and investigations, in which he ultimately resigned amid allegations he was trying to personally benefit from his office. Most of the department’s inspector general investigations were inconclusive, as Pruitt resigned in 2018 before the investigations were complete.

Possibly one of the most corrupt members of Trump world https://t.co/2qnbiAawO8

Scott Pruitt — Trump’s EPA administrator who resigned amid a five-month whirlwind of ethics scandals and at least 18 federal investigations — would like to run for Senate now. https://t.co/QExIcudT5m https://t.co/vxpTnrxzY1

It’s wild to me that we’re in an era so empty of shame and devoid of a true spirit of service where Scott Pruitt, rather than slinking off thankful he didn’t end up in prison for his myriad abuses of office at EPA, thinks instead he should run for the US Senate. https://t.co/p1d6hjRXjJ

During his tenure at the EPA, Scott Pruitt was at the center of (at least) 14 investigations. Now he’s parlaying that record into – what else? – a Republican Senate campaign in Oklahoma. https://t.co/IjUjRExeo5