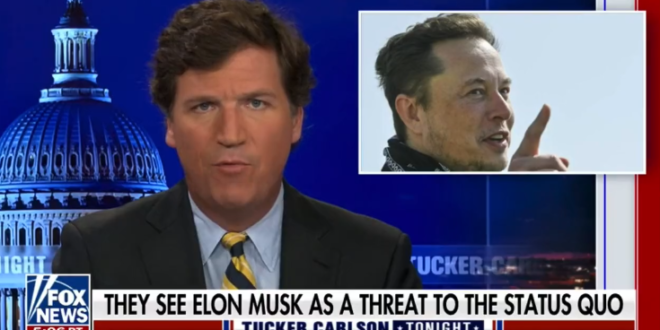 “It’s hard to imagine he bought Twitter shares for the investment. He’s already the world’s richest man, he does not need the money.

“Could this be the first move in a hostile takeover of Twitter that transforms Twitter into a platform for free speech? Seems that way.

“Elon Musk is not an orthodox conservative but he sees the people in power with devastating clarity. Not a lot of CEOs talk this way. In fact, none. They’re not allowed.

“The fact that a CEO who does talk this way may take over one of the most communications platforms in the United States is cause for celebration. Real celebration.

“The censors are powerful but it turns out they may not be all-powerful.” – Tucker Carlson, last night.

The piece linked above goes on to catalogue multiple examples of “Mr. Free Speech” Elon Musk going after his critics on Twitter.

Tucker Carlson says one reason the woke left will target Elon Musk is because they hate big families. pic.twitter.com/nfkgKFFViu

“Restoring free speech to Twitter is the greatest possible threat to the people in charge. They have to control the information. If they don’t, they fall.” pic.twitter.com/5U5aBaDMmz

Previous Kellyanne Conway: Kamala Harris Should Focus On “Female” Issues Like Children And Education [VIDEO]
Next NYC Fires Anti-Masker After She Ambushes Mayor