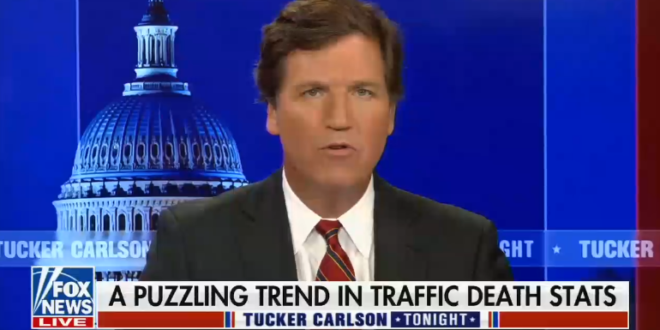 If you look at the numbers, you will notice that traffic deaths among African-Americans in the year 2020 surged in the month of June. Fatalities among Black drivers in June 2020 were fully 55 percent higher than they were in June of 2019. You never see increases like that. What could have happened?

Well, let’s see. It was in the last week of May of 2020 that a convicted felon called George Floyd died in police custody in Minneapolis and after that, you’ll recall, everything changed.

What changed most of all was how we regard the rule of law. As Russ Martin of the Governors Highway Safety Association put it, Floyd’s death, quote, “accelerated national discussion about equity in transportation.” And that discussion would include, quote, “questions about enforcement.” Oh, there it is, right there. That’s the answer.

Cops across the country were told to stop enforcing traffic laws against Black drivers. No one wanted to be accused of arresting somebody for the crime of, quote, “driving while Black.” So, in the name of equity, the law no longer applied to huge numbers of people. Result? Thousands of Americans died.

Previous Cultist Ohio GOP Group Calls For Boycotting Coming Trump Rally Over Vance: If You Do Attend, “Boo Him”
Next Meadows Was Registered To Vote In Three States