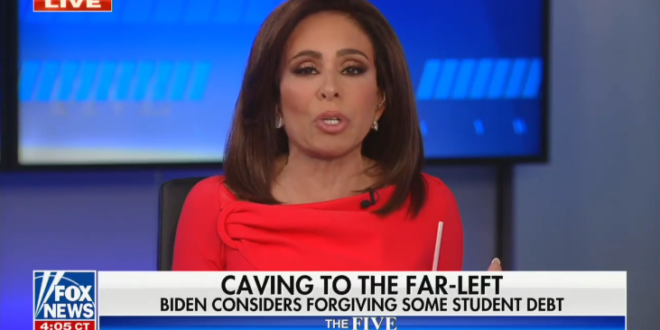 Campaign Debt Deadbeat Ridicules Move To Cancel Student Loans: “Pay Off Your Bills Just Like We All Do”

“Let me just finally say this. This asinine ‘I wanna pay off student debt’ is an insult to the senior citizens, to the people who pay taxes, to people who decide, you know, ‘Do I wanna buy meat this week or pay for my medicine?’

“That’s hogwash. You’ve got so many jobs, you’ve got a great economy? Let ’em work and pay off their bills – just the way all of us do.

Jeanine Pirro racked up hundreds of thousands of dollars in debt in her failed 2006 Senate bid against then-Senator Hillary Clinton.

Now she’s stiffing the vendors she owes the money to https://t.co/fccdNvDHx3

Calling student loan forgiveness “asinine” and an “insult,” Judge Jeanine says: “Let them work and pay off their bills. Just the way all of us do!”

Pirro completely stiffed her campaign vendors and creditors out of nearly $600,000.https://t.co/KptjP4Bavp pic.twitter.com/5moBJIBRE3