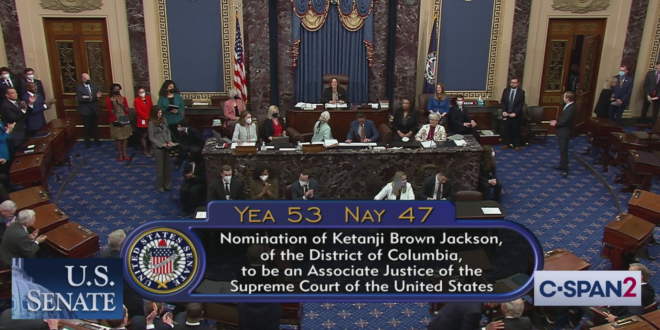 The first Black woman justice won’t start hearing arguments until the next term begins in October. The justice-in-waiting hasn’t said how she’d spend the next three months, though she will almost certainly devote time to hiring law clerks and deciding how she will run her chambers.

Although Jackson can remain on the appeals court until Breyer retires, she may not have a lot of work to do there as her time winds down. She’s unlikely to take on any new cases because she would then have to recuse from those matters should they get appealed to the Supreme Court.

Judge Jackson’s nomination not being called because Sen Rand Paul has not shown up for the vote.

>@SenRandPaul is missing. And, true to form, vexing his colleagues.

HISTORY MADE: The Senate erupts in cheers after a 53-47 vote in favor of confirming Ketanji Brown Jackson's nomination to the Supreme Court pic.twitter.com/x09WaHNrtq