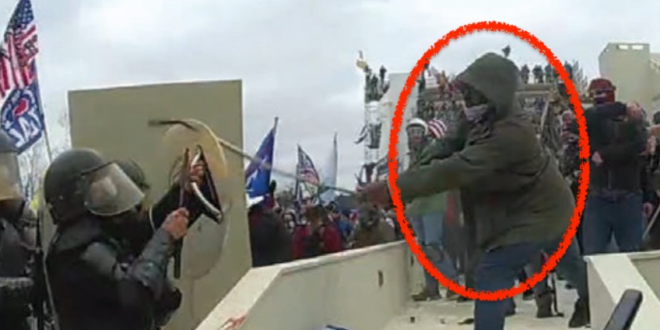 Mark Ponder, 56, admitted Friday to striking three police officers with a pole during the melee outside the Capitol building on Jan. 6, hitting one of them so hard that the impact shattered the officer’s riot shield.

Ponder emerged seconds later, having “re-armed himself with a new, thicker pole that was colored with red, white, and blue stripes,” the press release said. At around 2:32 p.m., Ponder ran toward a second Capitol Police officer and struck again, but that officer was also able to protect himself with his riot shield.

According to the Justice Department, the federal assault statute carries a maximum sentence of up to 20 years in prison and a fine of up to $250,000. The plea agreement, which considers Ponder’s 2008 conviction for robbery and bank robbery, estimates a sentencing range of 57 to 71 months and a fine between $20,000 and $200,000.

MORE: Mark Ponder, one of only a handful of D.C. residents charged in the #CapitolRiot, pleaded guilty today to repeatedly attacking police on Jan. 6. He’ll face 57-71 months in prison at sentencing in July. https://t.co/O3IPFyR18L