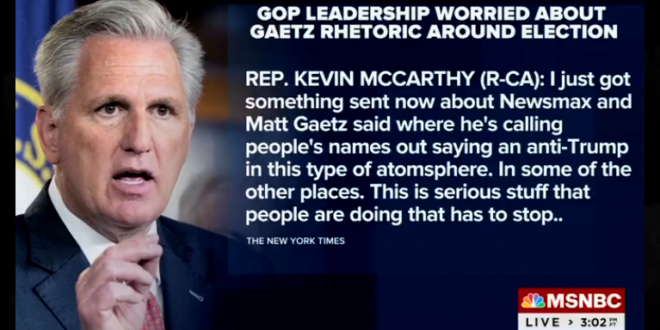 Representative Kevin McCarthy, the House Republican leader, feared in the aftermath of the Jan. 6 attack that several far-right members of Congress would incite violence against other lawmakers, identifying several by name as security risks in private conversations with party leaders.

Mr. McCarthy talked to other congressional Republicans about wanting to rein in multiple hard-liners who were deeply involved in Donald J. Trump’s efforts to contest the 2020 election and undermine the peaceful transfer of power, according to an audio recording obtained by The New York Times.

In the phone call with other Republican leaders on Jan. 10, Mr. McCarthy referred chiefly to two representatives, Matt Gaetz of Florida and Mo Brooks of Alabama, as endangering the security of other lawmakers and the Capitol complex. But he and his allies discussed several other representatives who made comments they saw as offensive or dangerous, including Lauren Boebert of Colorado and Barry Moore of Alabama.

Kevin McCarthy: This is serious shit. Cut this out.

MSNBC just broadcast another new McCarthy audio clip of him calling out Matt Gaetz. Steve Scalise can then be heard calling out Mo Brooks and Louie Gohmert, and adds, “it’s potentially illegal, what he’s doing.” pic.twitter.com/2IbtCeucJu