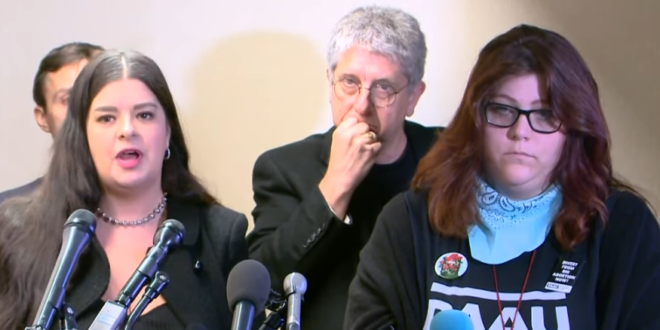 Two anti-abortion activists made new claims Tuesday about the five fetuses police found in one of their apartments last week, attesting that a medical waste worker had allowed them to seize 115 fetuses from outside a Washington, D.C., clinic last month.

They claim they had approached and taken the fetuses from a driver for Curtis Bay Medical Waste Services who was loading boxes into a vehicle. “We asked him if he knew what was in the boxes, and after he said no, we told him: dead babies,” Teresa Bukovinac said Tuesday.

Bukovinac said the driver willingly handed the box over after she and Lauren Handy told him they wanted to give the contents “a proper burial and a funeral.”

The driver’s employer, Curtis Bay Medical Waste Services, denied their account and added that the use of its services to dispose of fetuses was against company policy.

The two women said that a Roman Catholic priest said Mass, and that they read aloud names that they gave to the fetuses before 110 of them were buried, with a priest present, at a location they declined to disclose.

They said their lawyer then contacted the Washington police to pick up the five remaining ones, which the activists said they considered evidence of violations of federal laws, including the Partial-Birth Abortion Ban Act, which bans certain methods to terminate pregnancies starting at 12 weeks.

Anti-abortion activists in Washington, D.C., say they were allowed to take 115 fetuses headed for disposal from an abortion clinic. The medical waste disposal company denied their account, and the police are investigating. https://t.co/8kNevIqs44