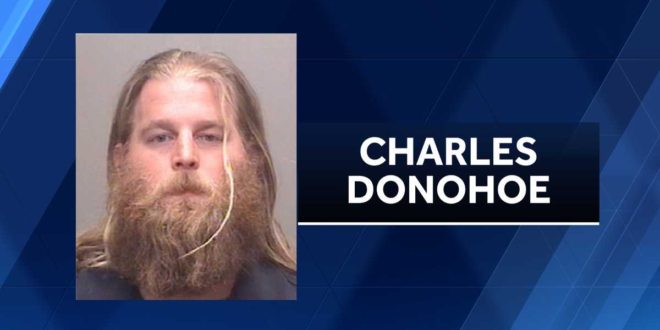 Charles Donohoe, 34, who has close ties to Proud Boys leader Enrique Tarrio, pleaded guilty to conspiracy and assaulting and impeding police officers. The maximum charges are 20 years for conspiracy and eight years for the assaulting and impeding police charge, although he’s expected to receive a lighter sentence for pleading guilty and cooperating.

As part of the plea agreement, Donohoe admitted that, “At least as early as January 4, 2021, and before he decided to travel to Washington, D.C., Donohoe was aware that members of MOSD leadership were discussing the possibility of storming the Capitol…Donohoe understood that storming the Capitol would be illegal.”

Prosecutors cracked the phone of Proud Boys leader Enrique Tarrio in March and have said in court that there is new evidence that could lead to additional charges or arrests in that case.

The head of the West Virginia chapter of the Proud Boys pleaded guilty on Wednesday and sad that he looked to Donohoe, Tarrio, and others as leaders on January 6, and another Proud Boys member is slated to plead guilty later Friday.

Five other alleged leaders of the Proud Boys — Ethan Nordean, Joseph Biggs, Zachary Rehl, Tarrio and Dominic Pezzola — have pleaded not guilty. According to court records, Donohoe helped to recruit members and lead the Proud Boys on January 6.

Prosecutors also said Donohoe provided specialty radios to members of the group so they could communicate during the Capitol attack and that he also urged the group’s members to “nuke” a set of Telegram messages to avoid detection.

Donohoe also raised concerns in one of those messages about the possibility of “gang charges,” after Tarrio’s arrest. Donohoe approached the Capitol in one of the earliest waves to reach the building on Jan. 6 alongside others charged in the conspiracy.

He helped another Proud Boy, Dominic Pezzola, carry a stolen police riot shield to the foot of the building. Pezzola would later use that shield to smash a Senate wing window that led to the first breach of the Capitol building that day.

NEW: The guilty plea from Proud Boy leader Charles DONOHOE gives prosecutors a high-profile cooperator in one of its two most important cases stemming from the Jan. 6 attack on the Capitol.https://t.co/rfOibnCbsF

North Carolina Proud Boys leader Charles Donohoe has pleaded GUILTY to one count each of conspiracy and assaulting police, both felonies. He’s the first defendant in the PB leaders case to accept a plea deal from the government. That will include cooperation in the case.