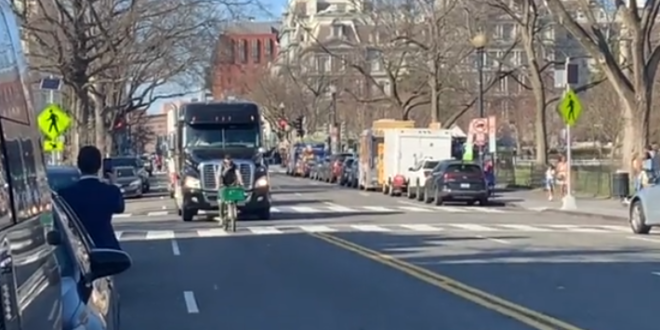 Traffic continued to be disrupted on Saturday in the Washington, D.C. area as a convoy of trucks continued their protests against pandemic restrictions around the nation’s capital. But over the weekend, the convoy appears to at least temporarily have been brought to a crawl by a single slow-moving cyclist.

Another video posted on Twitter shows a driver going up along the cyclist to try to talk to him. “Hey, what are you doing? You got a a bunch of trucks behind you,” the driver can be heard asking the cyclist. After the driver repeats the question, the cyclist keeps saying he can’t hear the driver. “It’s too loud,” the cyclist says as he keeps on riding.

The second clip has over 4 million views.