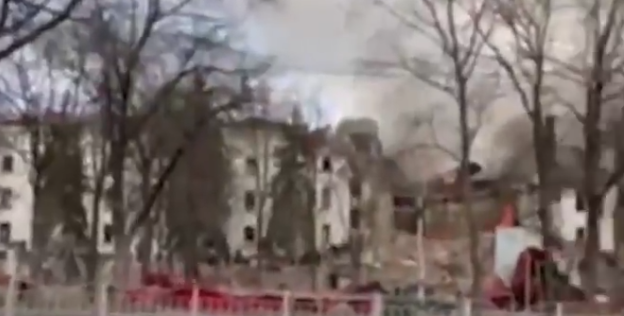 A theater where hundreds of people had taken shelter in Mariupol was bombed on Wednesday, according to local authorities, as hundreds of thousands of people remain trapped in the coastal Ukrainian city that has been encircled for weeks by Russian forces.

Mariupol City Council, who shared an image of the destroyed building, said Russian forces had “purposefully and cynically destroyed the Drama Theater in the heart of Mariupol.”

“The plane dropped a bomb on a building where hundreds of peaceful Mariupol residents were hiding,” it said. CNN has geolocated the image and confirmed it is of the theater in the southeastern port city. The word “children” was spelled out on two sides of the theater before it was bombed, according to satellite images.

The word ‘children’ was painted in large Russian script on the ground outside the Mariupol Drama Theatre, Maxar satellite images collected on March 14 showed. Ukraine accused Russia of bombing the theater on Wednesday. Russia denies the attack https://t.co/JtB56K8eCz pic.twitter.com/iV13h0dBXm

Mariupol. The drama theater from the inside before the russians shelled it. It’s scary to see how many children there were… #WARINUKRAINE #Ukraina #war #mariupol pic.twitter.com/MfN2OAGPYt

Another horrendous war crime in Mariupol. Massive Russian attack on the Drama Theater where hundreds of innocent civilians were hiding. The building is now fully ruined. Russians could not have not known this was a civilian shelter. Save Mariupol! Stop Russian war criminals! pic.twitter.com/bIQLxe7mli