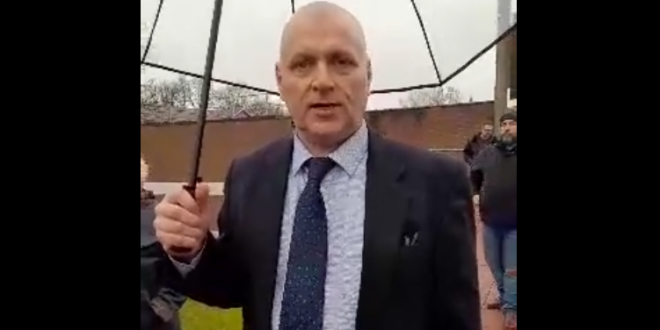 Two so-called sovereign citizens have been found guilty of impersonating police officers for presenting themselves as “peace officers” at COVID-denier demonstrations in the UK.

Experts hope the ruling will have a chilling effect on the practice, which has become common at anti-vax protests as sovereign citizen ideology – a fringe anti-government conspiracy theory – has become a driving force in the COVID conspiracy movement.

David Stewart, 54, and Jessica Collins, 32, from Haywards Heath, West Sussex, were convicted of the charge at Horsham Magistrates Court on Wednesday. Stewart was fined £392 and ordered to pay £689 in costs, while Collins was fined £126 with £684 in costs.

A British couple who wore police hats and hi-vis vests were told to stop cosplaying as cops, as a court convicted them of impersonating police. Experts hope this will have a chilling effect on the practice, which has become common at anti-vax protests. https://t.co/RFLEsqX6ec

Says he’s a “glitch in the matrix” and if he has to he’ll take this to the European court of Human rights. pic.twitter.com/RPzhLSaQTL