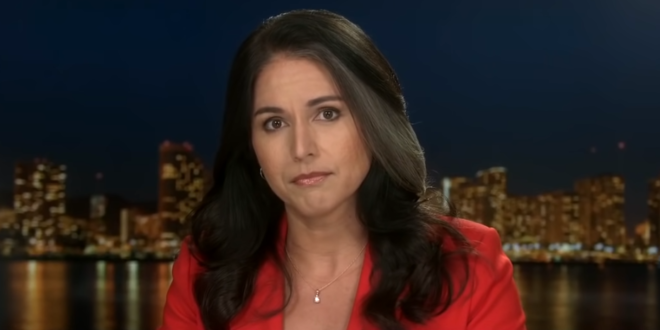 Tulsi Gabbard shared false information Sunday about U.S. involvement in Ukraine biological laboratories Sunday, giving credence to an unfounded Russian-backed conspiracy theory the U.S. has warned could serve as justification for Russia to use biological and chemical weapons against Ukraine.

In a two-minute video posted to her Twitter Sunday morning, Gabbard said there are 25 to 30 American-funded biological laboratories in Ukraine and called for an immediate ceasefire at the laboratories as they could spread dangerous pathogens.

SCOOP: The accused Russian agent Elena Branson—who’s been charged for acting as a Russian agent & failed to register under FARA—donated to Tulsi Gabbard, a longtime favorite of the Russian propaganda machine. From me & @SollenbergerRC @thedailybeast https://t.co/zFgzjo6CdM

#Russia‘s state TV showcases clips of Tucker Carlson and Tulsi Gabbard, helping to perpetuate the myth of dangerous “bio-weapons” in Ukraine. This conspiracy theory is being spread by Russia’s state TV with special zeal.#TuckyoRose pic.twitter.com/csMPrb0ncF

Yes, Tulsi is awful – congratulations to the new comers just catching up on this. We’ve been shouting about how awful Tulsi is since she started denying Assad’s chemical weapons attacks. The Syria Test proves true once again. https://t.co/AfIv4kElI0