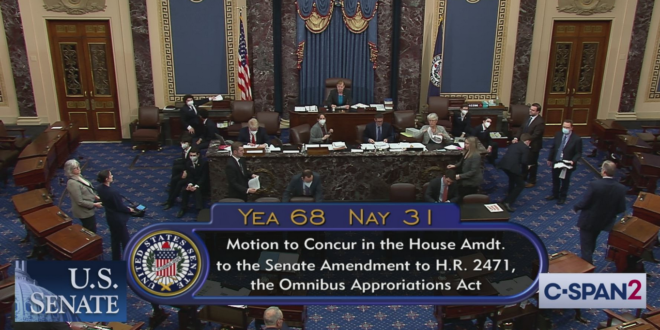 The Senate voted on a bipartisan basis Thursday evening to pass a massive $1.5 trillion government funding bill that includes $13.6 billion in aid to Ukraine. The bill, which the House passed Wednesday evening, can now be sent to President Joe Biden to be signed into law. The final tally in the Senate was 68-31.

Government funding is set to expire on Friday and lawmakers have been racing the clock to prevent a shutdown, which both Democrats and Republicans want to avoid.

Senate Majority Leader Chuck Schumer, in a floor speech Thursday morning, touted the aid to Ukraine in the legislation and pointed to it as a pressing reason for the Senate to quickly pass the massive spending bill.

The road to final passage was especially dramatic, even for a massive government funding deal. To lock in an agreement to fast-track debate, the chamber voted Thursday night on three GOP amendments. The Senate voted 50-49 to defeat a proposal by Sen. Mike Lee (R-Utah) to end federal Covid vaccine mandates.

The chamber also voted 64-35 to shoot down an amendment from Sen. Mike Braun (R-Ind.) that would bar earmarks, a practice Congress revived for the first time in more than a decade by including billions of dollars in special projects within the package.

Senate Minority Leader Mitch McConnell signaled he was satisfied that the bill raised defense and non-defense spending at similar amounts and did not scrap old GOP riders or add new Democratic ones.

Breaking News: The Senate approved a $1.5 trillion federal spending bill, including billions in aid for Ukraine. President Biden is expected to sign it.https://t.co/dn6Z45wYwK

A $13.6 billion emergency package of military and humanitarian aid for besieged Ukraine and its European allies is sailing toward final congressional approval. The money is hitching a ride on a $1.5 trillion, government-wide spending bill. https://t.co/9WcfUVTOL6

A massive spending bill for the fiscal year that began 5 months ago is headed to President Joe Biden’s desk after the Senate cleared it late Thursday, putting an end to a frenzied stretch of negotiations in both chambers this week. The vote was 68-31. https://t.co/A0QO3oaYL4