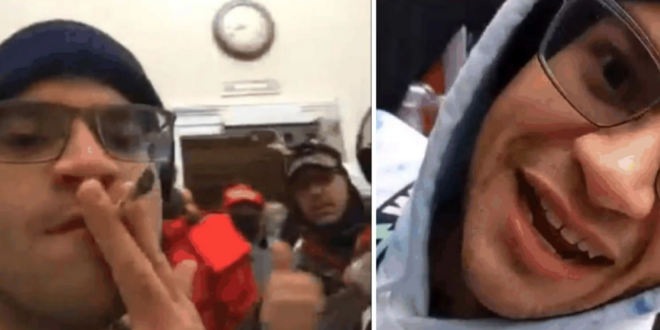 A federal judge sentenced a New York man to twice the government’s recommended sentence on Wednesday, saying he’d shown no remorse for and had even downplayed the Jan. 6 assault on the U.S. Capitol Building.

James Bonet, 30, pleaded guilty in October to one misdemeanor charge of entering and remaining in a restricted building. The judge sentenced Bonet to 90 days in jail – twice the DOJ’s request – and a year of supervised release.

As part of the plea deal, the government agreed to drop a much more serious felony charge of obstructing the joint session of Congress that could have earned Bonet up to 20 years in prison.

Read the full article. Bonet was turned in by his coworkers.

Federal Judge Questions Prosecutor About ‘Sweetheart’ Plea Deals Before Sentencing Man Who Lit Up a Joint Inside Capitol on Jan. 6https://t.co/oVuYeH4dyB

During sentencing for Jan 6 defendant, James Bonet, Judge Emmett Sullivan stops prosecutors from discussing Trump on Jan 6, saying, “For all I know, he could be indicted one day.” Judge explains mentioning Trump today would force him to recuse from Trump’s very hypothetical case

🚨 SENTENCE: U.S. District Judge Emmet Sullivan sentences James Bonet to 90 days in jail — twice the 45 days the DOJ asked for — and one year of supervision. He’ll also have to serve 200 hours of community service. #CapitolRiot pic.twitter.com/zPfJLI01jD

The sentencing hearing for James Bonet is underway. The DOJ says Bonet has continued to downplay or even celebrate the #CapitolRiot. Says a probation-only sentence should be reserved for truly exceptional circumstances, and Bonet’s case doesn’t merit it. https://t.co/TWUZrP2s76

Worth giving credit where credit is due: The interview that helped James Bonet earn himself 90 days in jail was done by @Anyaon10 with WTEN. https://t.co/e87RlNLV8y